Okay, I am not a superhero, but I will lay claim to something more than mere delusions of grandeur. Like the superheroes of our imagination, I am an otherwise ordinary-looking individual. And, like them, on occasion I manifest extraordinary powers to preserve our freedom and democracy …

So it was that four of us circled ourselves in the early dawn at the edge of an empty parking lot on Tuesday morning. The gentle breeze and clear skies seemed innocuous. But the stillness, the stillness might’ve signaled to the attentive onlooker that something unusual was about to happen.

And then it did.

Our leader, her red hair beckoning flames in the morning sun, spoke first. And her words called the rest of our voices forth into an incantation fit for flying capes and masked crusaders:

“I … solemnly swear that I will perform the duties of election judge according to law and the best of my ability and will diligently endeavor to prevent fraud, deceit, and abuse in conducting this election. I will perform my duties in a fair and impartial manner and not attempt to create an advantage for my party or for any candidate.”

No. Not “oh.” In the vivid vocabulary of Vice President Joe Biden, this is a “big f***ing deal.” I mean, four of us, complete strangers, meet in an empty school parking lot at 6:00 a.m.—and thirty minutes later engage ourselves in a ritual recitation that transforms us from mere neighbors into stewards of democracy. With these words we become keepers of an electoral process for which many around the globe still yearn. 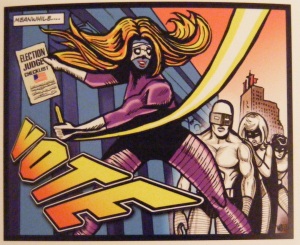 True, mostly we just push papers. Register new voters. Collect signatures in the registration roster. Hand out receipts at one table and then collect them at the very next table in exchange for a ballot. And see to it that the ballots, duly marked, make their way into the big black box that today becomes the voice of our combined citizenship.

So capes, tights, and masks would probably be overkill. But on this day, in the humble (and sporadic) procession of citizens who cast their votes, the highest ideals of our democracy are being practiced. Setting campaign rhetoric aside but with competing visions of the common good still claiming our silent allegiances, on this day we do something all too uncommon: we settle our differences peacefully.

And on this day a whole assortment of us step out of our otherwise ordinary lives to become election judges for a day. If “superhero” is an overstatement, it is only just barely so. After all, in a democracy the real superpower is helping to insure that every vote, every voice, is heard.

David R. Weiss is the author of To the Tune of a Welcoming God: Lyrical reflections on sexuality, spirituality and the wideness of God’s welcome(2008, Langdon Street Press). A theologian, writer, poet and hymnist, David is committed to doing “public theology” around issues of sexuality, justice, diversity, and peace. He lives in St. Paul and speaks on college campuses and at church and community events. You can reach him at drw59@comcast.net and read more at http://www.tothetune.com.

2 thoughts on “The Fantastic Four”