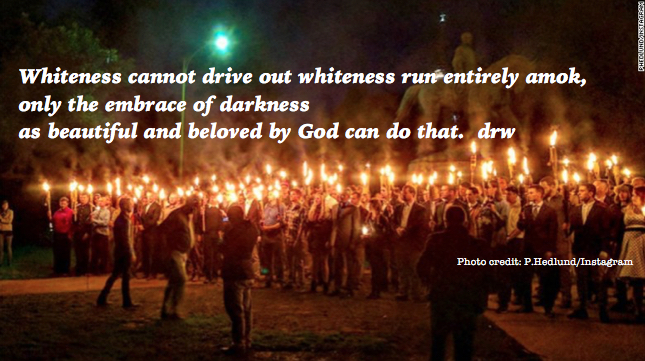 I am not even remotely interested in getting Trump to unambiguously condemn white racist violence. It is clear—it has been clear since during his campaign—that he is allied in principle and in prejudice with the aims of white supremacy. Any words that say otherwise are scripted lies.

Therefore I am interested in—and will be satisfied with nothing less than—removing him from power. Nothing less than this will begin to assert politically that Black Lives Matter.

Both Democrats and Republicans have been recklessly passive in this regard. Lots of political posturing from all angles, but as yet no one willing to take straightforward political measures to remove the mad man from behind the wheel of the careening car that is today’s United States of America.

From Charlottesville forward, every lost moment should be measured in lost lives.

Lastly, while I appreciate MLK’s moving rhetoric—and agree with him absolutely—it’s time to re-word his wisdom for THIS moment: “Whiteness cannot drive out whiteness run entirely amok, only the embrace of darkness as beautiful and beloved by God can do that.”

Until we are ready to say that black (and brown, and red, and yellow . . .) women and men carry within them wisdom that is essential to America’s promise, wisdom that must be at the forefront of our national healing AND AT THE HELM OF OUR POLITICS—until then we who have been raced as white stand condemned before God and our fellow humans.