NOTE: This post turned out to be the first in a series of posts* in which I wrestle with the notion of police abolition. I’m NOT offering a detailed explanation of how that would work—there are others who can do that far better than me. Rather I present a series of images to help white Christians in particular hear in these calls to Defund or Abolish the Police some surprising echoes of biblical themes … and to encourage us to consider whether God is doing a new thing once again today.

I hear the nervous shuffling of feet among my family and friends. From some the derisive laughter that carries more than a hint of unease beneath attitude. I’m uneasy, too. I do not know what lies … out there, up ahead. I only know what lies behind—and that I am not going back. 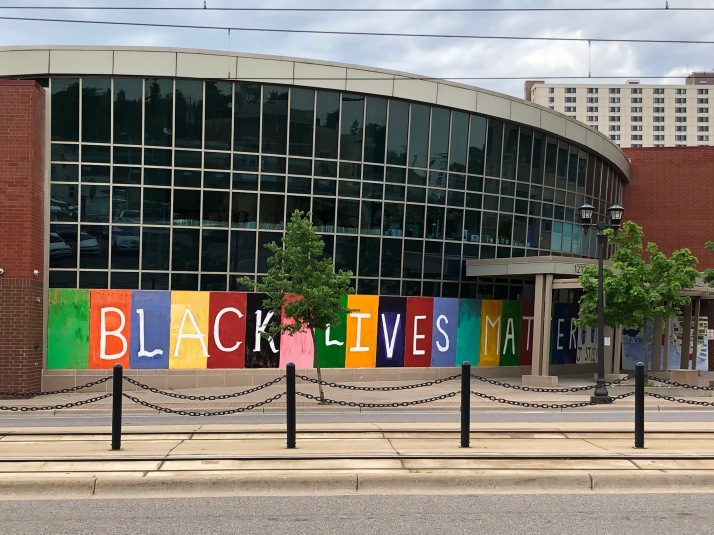 Defund, dismantle policing?! The challenges—and the possibilities—run far deeper than either phrase or any sound byte can suggest. I may unpack some of them in another essay. Here I only want to re-frame the emotions that rise within us at the prospect of such unimaginable change.

Because I wonder. Were there any Egyptians who—having endured those ten ruinous, calamitous, riotous plagues—chose to pack their bags and leave with the Hebrews on that first Exodus?

I mean, I really wonder. If I had seen how their God inspired them to yearn for lives they’d not yet known, to break at last their years of bondage—which, plagues or not, meant choosing wilderness as their way out—had I seen this with my own eyes, would I have had the courage then, to leave behind my comfort, long built on the back of their servitude, to join them on a journey toward some … imaginary promised place?

I’d like to think I know, but all I can do is wonder. If all I knew (besides their brutal lot in life—inextricably tied to my personal peace) was that, beyond the dried up seabed, they were headed somewhere marked on the compass only as lying in the direction of Beyond. And toward something called Beloved. Would I have lifted my Egyptian feet to walk besides those former Hebrew slaves?

Standing as I am—as you are, too—at the edge of a land I have never seen, I honestly cannot fathom what it means to safeguard a community’s life after defunding, dismantling the police. But, for that matter, just as honestly, had I been an Egyptian or a wealthy Southerner (likely even a barely-getting-by Southerner), I suspect I could not have fathomed what it would mean to reshape my life without slaves beneath—their oppression the unquestioned infrastructure deemed essential for life back then.

But even in my not knowing, I remain persuaded (against my own fears) that they—slaves, black people, Native Americans, undocumented immigrants—know things we do not know. Things we cannot imagine. I don’t think they know the route to that next place. But they know, better than all the rest of us put together, the folly of reforming an institution whose very formation (via Southern slave patrols) was intended to unform the idea of freedom in those to whom freedom was denied.

The Exodus tale agrees, it seems. The story says—to be as pointed about it as possible—that of all the policy papers that might’ve discussed “the future of slavery in Egypt,” the truest point of view came from the underside, carried by the cries, the anguish and the anger of those enslaved. And if their cries questioned the value of even robust reforms and opted instead to defund and dismantle Pharaoh’s slave economy and culture by their Exodus, then our Scriptures say that viewpoint carries truth. Although, in truth, we’ve done our best to tame that tale, contain it to another time and place. Surely such disruptive steps for freedom have no claim to truth today.

But I wonder. Because the logic—the theo-logic, God-driven understanding—of that story seems to say that still today those who feel a knee laid heavy on their neck have uncanny insight into the damning ways that persons and societies, cultures and institutions, “innocent” policies and practices prioritize white knees over black necks. So, I’m uneasy, yes, but I can’t help but wonder. Because to bring it to this point, that ancient sacred tale tells me today that black people have a type of knowledge—an expertise—about the prospects for reforming the police that those of us who grew up never worrying about a knee upon our neck … simply do not have. Their knowing is borne of lives ground up generation after generation, borne of labor the wealth of which wound up mostly in our hands (and homes) not theirs, borne of rights ever bounded to ensure our rights (and wrongs) held sway. And now their knowing hums a steady searing truth about the whole project of policing: “All that is familiar, stable, safe … is unsafe for you.”

We wouldn’t doubt that those ancient Hebrews heard as much in the groans that tolled their hours day by day by day. We wouldn’t question their wisdom in choosing wilderness over all that they had ever known. But still we count it prudent to call for slow and measured moves to ease the discomfort of our black siblings just enough to keep them off the streets and keep the system safe … for us.

We, who have blindly benefitted from all that is so perniciously familiar that it passes just for “normal,” we cannot fathom why anyone would think the unfamiliar, unknown, uncharted idea of life beyond the police could possibly be wise. But they know. And in their knowing they make demands that shake us and our good sense to the very core. Alas.

I hear the nervous shuffling of feet among my family and friends. From some the derisive laughter that carries more than a hint of unease beneath attitude. I’m uneasy, too. I do not know what lies … out there, up ahead. I only know what lies behind—and that I am not going back. 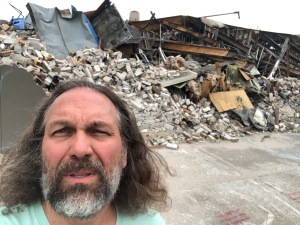 The former site of an Ethiopian restaurant, a tax service, and an auto parts store in St. Paul.

I am uncertain, as you are. Behind me the rubble of so many buildings (only some of which lined our streets, while others towered within our hearts and minds). Ahead, this sudden, unexpected—dare I say, miracle of—dry land where once a sea had blocked the way. And there beyond: this wilderness. Out there, perhaps, a place where we might be … Beloved. Together. Who knows. Only the journey will tell.

But I say, with fierce and fraught resolve, Come this wilderness. Come.

NOTE: Twenty-four years ago, while teaching a First-Year Seminar on Intro to Bible at Notre Dame, it was common practice to begin my class with a prayer. In September 1996 I wrote this prayer to open our class the day we discussed the Exodus. Time to pull it out and use it again.

God of freedom and justice, give us the wisdom to feel a bit of fear as we read these passages. Give us the uncomfortable honesty to see that we today stand closer to Egypt than to the Hebrew slaves. In a world where many live like slaves so that a relative few can live like kings, we are among those who wear purple. When third world citizens—or when the poor in our own cities—clamor for justice, too often and too easily, like Pharaoh, we ignore your demand that we let your people go. Forgive us, Lord. Do not harden our hearts, but soften them. Awaken in us feelings of compassion. If we would truly be your people, move us to place ourselves alongside those persons whose company you have chosen to keep: the weak, the forgotten, and the outcast. Exodus means freedom for slaves, Lord. We know that. But for royalty, Exodus means sacrifice. Give us the courage—and the humility—not to resist the freedom you intend for others. Indeed, give us the courage—and the humility—to welcome their freedom as the basis for our own. AMEN.

David Weiss is a theologian, writer, poet and hymnist, doing “public theology” around climate crisis, sexuality, justice, diversity, and peace. Reach him at drw59mn@gmail.com. Read more at www.davidrweiss.com where he blogs under the theme, “Full Frontal Faith: Erring on the Edge of Honest.” Support him in writing Community Supported Theology at www.patreon.com/fullfrontalfaith.

9 thoughts on “Come This Wilderness”